We are celebrating the 50th anniversary of our hotel this year and would be delighted if you were to celebrate with us. Below is a small family history for those interested, with photos and brochures from the past.

Franz and Magdalena Klaus take over the inn at Hauptstraße 5 at the current location of the Raiffeisenbank in Wolkersdorf. This was the social center of the town; the fair and almost all balls are held here.

The wine house moves across the street to its new location Julius Bittner Platz 4.

Not just the moon landing and the rise of the town of Wolkersdorf, but also the planning of a new hotel wing to complement the existing inn.

The first hotel wing with 30 double rooms is opened in May. In the early years the rooms with bathroom are rejected quite regularly because they were deemed too expensive.

Extension of the hotel with kitchen and dining room. The hotel restaurant goes into full operation and the inn is leased. Franz and Magdalena Klaus retire, Renate & Rudolf Klaus take over the business. The founder Franz Klaus dies in July 1985.

The basement was transformed into a small wellness area with sauna, steam bath and fitness room. The former outdoor terrace becomes a conservatory, the garden is redesigned and a small pool with sunbathing area is created.

The iron curtain rises and the Weinviertel is no longer the end of the western world. On a January weekend in the early 1990s, the hotel reached its peak occupancy of 220 guests in one night. Exclusively Polish families on their way to ski holidays.

Purchase of the property at Kirchenplatz 5 in Wolkersdorf. The former manorial cellar and granary of the Wolkersdorf Castle dates back to the 16th century.

The main wing of the hotel was increased and expanded by 13 rooms and the entire building fitted with functional thermal insulation. In addition to the conference rooms Violand and Wolfger, a contemporary entrance area was built.

The apartment building at Kirchenplatz 5 with 11 residential studios goes into operation.

Installation of the 30 KV photovoltaic system on the roof of the hotel. 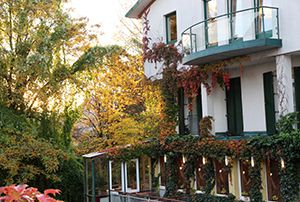